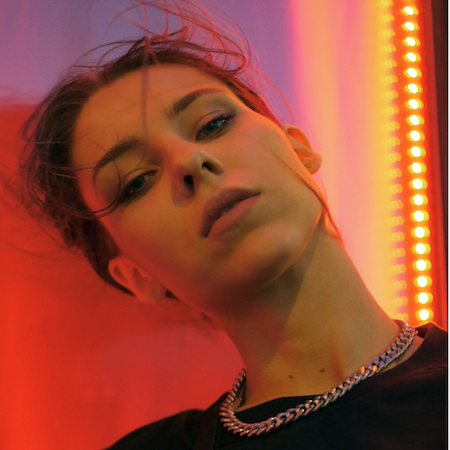 VTSS’ commitment to full immersion in the rave culture has quickly qualified her to an intriguing double life, one spread between the dankest of basements and the largest festival stages, occupying a challenging, even provocative space between the ‘underground’ and the ability to entice more and more followers, a beacon for the passionate new wave of hedonistic, no-fucks-given techno enthusiasm. Whatever the hype, VTSS’ background, a lifelong desire to transcend through rave, speaks for itself. Not so long ago, the daily life of Martyna Maja was remarkably different. By day, she studied sound engineering, informing her already distinctive solo productions, a constant work in progress even now. By night, years spent DJing and playing live at the legendary, scene-sculpting Brutaz parties, alongside Warsaw institution Jasna 1, ensured that VTSS played every room, at every hour, from deep closing sets to the challenge of the warm-up. These days, her focus is on energy in its purest form. Touching on both the history and emerging reinvention of techno, acid, EBM and a smattering of hardcore, a VTSS DJ set blends genres, scenes, past and present with unrelenting speed and force. It’s an addictive quality that makes her a returning favourite at clubs and festivals alike. She has qualified to resident status at Paris’s already iconic Possession rave, while Unter in NYC and Reaktor in Amsterdam are just some of the parties at which VTSS has made an impression. For home entertainment, a series of notorious Boiler Room appearances have at least attempted to capture the liberating chaos conjured in response to her selections. When pressed on vinyl herself, VTSS has provided sonically diverse input to labels such as Intrepid Skin, Repitch (‘Identity Process’, featuring ‘CODE RED’, well into it’s third pressing having sold out twice) and Haven. The ‘Self Control’ EP on the latter introduced the world to ‘I Don’t Think It’s Better’, which quickly became an unexpected underground anthem, while Resident Advisor took the time to praise VTSS’ “loopy, ravey style that recalls classic ’90s Berlin”. Even her contributions to label compilations for the likes of VEYL and KAOS have the habit of causing seismic rave shifts, especially in the case of ‘Atlantyda’ on Monom Black, a psychedelic smash that rang out across the biggest rigs throughout 2019. Indeed, having crossed the Polish border in her beloved Toyota Yaris, it is Berlin where VTSS has chosen to take any occasional rest. Across the city itself, she has been a fixture at Berghain, developing a cult following for her Thursday night appearances at Saule, often alongside or B2B with partner-in-crime, SPFDJ, as well as on the main floor. She is also one of the few DJs to have played both Atonal and CTM Festival in 2019/2020, building on appearances at the influential and avant-garde Polish festival Unsound, as well as an impending appearance amongst a cast of serious techno heavyweights at Awakenings in Amsterdam or Primavera Sound in Barcelona. Collaboration with like-minded friends and contemporaries are key to VTSS’ formula for freedom (not to mention, straight-up, shameless fun). She has established a unique B2B dynamic with Randomer under the guise of ‘Body Sushi’, a high-impact meeting of minds and rave mettle. She has also collaborated with prolific provocateur Varg and, and has adopted A&R duties for Hellcat, a sub-label of Bjarki’s always invigorating bbbbbb, with the aim of providing a home for some of the emerging new talent featured throughout her sets. Leading with an unmistakable attitude, a wicked sense of humour and an unstoppable taste for techno’s transgressive edges, VTSS is an unapologetic star of dance music’s wild reinvention.